In the 90s and noughties, it’s like you couldn’t buy a Tarot deck without a large pull-out sheet or a page in the LWB* with the Celtic Cross spread:

This, the Celtic Cross. For a beginner, that meant sticking all your 10 fingers in the * Little White Book while you were looking up card meanings. Ah, memories.

Tarot books and different decks and spreads have become more abundant and user-friendly than ever. While these are the tools of the trade, the human dynamics of the reading session have not changed. As I described in Better Questions for Empowered Tarot Readings, Tarot readings are best done as a 3-way conversation between the reader, the querent, and the cards.

One-card, 3-card, and 5-card draws are short, simple, and ubiquitous in Tarot readings offered online. I’ve done this myself (at in-person events), when queues are long and time is short. They can be both accurate and concise (10 to 15 minutes), but insufficient for those who have a lot of stuff on their plate and questions about all of it. I’ve been rather spoiled in my own experiences because I like getting longer readings myself, with people who can roll with my questions and even pull out multiple decks for multi-layered readings. Improvisation from someone fully trusting their instincts is a beautiful thing to watch in person. (As a reader, it can also be a state of flow that’s pretty heady.)

For longer readings, putting the querent into a calm and centered state via a short meditation and visualisation, and/or letting them shuffle the cards if they are comfortable helps to keep the session focused. There are assuredly “bad”, scary cards in the Tarot that can pop up–just as there are not-so-great surprises in real life. A calm reader who doesn’t panic and who puts “scariness” into perspective is an empowering one.

But it can be challenging being the reader who has to explain the “bad” signs. When tackling romantic or relationship questions, talking about red flags isn’t fun. It’s one of the realities; but querents in the grip of limerence in the early days of a relationship are known to shop around with Tarot and psychic readers to glom onto the reader that will tell them all the positive, rose-coloured things. (I’m not that reader, and I won’t apologise for it.) 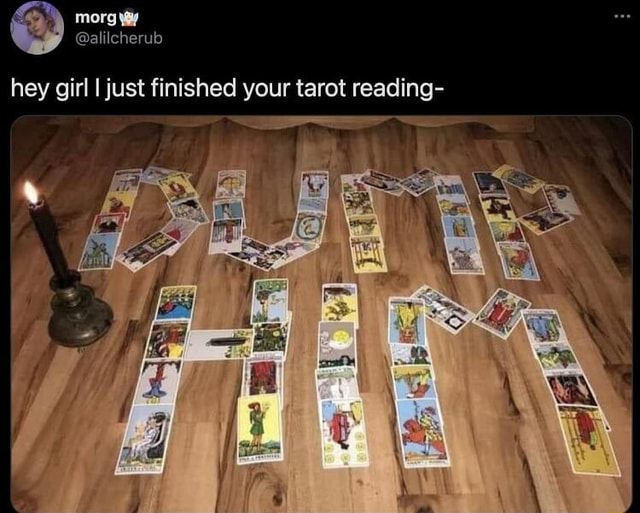 From the querent’s perspective, a reading that doesn’t tell us what we want might be classified here. But, in my own experience, I’ve treasured the readings that were utterly honest and truthful and gave me “bad” news straight up. Skillful readers can do this while reminding querents of their innate gifts and strengths. They can remind someone that better is possible–perhaps down another path.

I’ve told this story elsewhere (at the IG link below actually) that I was advised in a Tarot reading to have a second child in my marriage before giving up on it. I couldn’t believe my ears that a child (to be raised to adulthood, a major commitment and entire human being) was advocated as a relationship fix! (After psychotherapy training and reading on dysfunctional families, the advice feels even more egregious today.)

A different problematic reading that I’ve both experienced and witnessed being given (too often) is by the “saviour salesman”. The reading emphasises that you’re cursed or blocked or energetically wounded. But behold! The reader can fix this for an additional 200 bucks. Buy this blessed candle, custom-made crystal bracelet, or healing session. Sponsor this puja or priest at a temple you’re never going to visit. I believe in both spiritual interventions and placebo effects, but pushy sales pitches by spiritual narcissists on vulnerable querents cross a line for me.

You can have querents with problematic expectations:

In 2013, while I was in card reading workshops, students practised by reading for one another. I was paired with a woman who did not say 5 words to me, both while I was reading for her, and while she was reading for me! She kept her head and her gaze down, never meeting my eyes. There was no seeming interest in connecting with another person. She was self-protective with her energy and mumbled over the cards. In such situations the reader not only struggles to reach someone who is energetically closed, they can’t learn or confirm if their information is relevant and helpful (not that the information should ever be massaged to make a client happy).

It was a huge puzzle to me at the time, but now I can better articulate just how defeating that practice session was. People want to be seen. They also want safety in the experience: to be seen without judgement, prejudice, and toxic criticism. I wasn’t getting that from her, nor did she get that from me. Neither of us were connecting in that session.

(I stand in a better position now to suspect and understand why opening up can be a fraught and dangerous exercise for some individuals. I’m not sure even Tarot or spiritual help may reach them, until they recognise that walling off reflects a lack of trust in themselves and everyone around them. This can be a reaction to deep trauma and is a challenge to heal because we all need and desire safe human connection.)

Another tough nut in Tarot? The individual who’s gone to multiple readers and insists that all the readers she ever heard got everything wrong. (Her story was statistically suspect, tbh.) I wouldn’t and didn’t read for this person. I thought it more probable that power or denial games were being played and I had no desire to engage.

New age readers, witchy readers, channeling readers, or matter-of-fact Tarot readers–Readers are now as diverse as the new Tarot decks and reading styles out there. At the end of the day, the user’s empowerment and safe experience is the most important thing in my book. Got your own story? Drop a comment!

Note: Parts of this blog post were originally “The Responsibilities of the Tarot and Oracle Reader” and first posted in June 2017. The other part is now Tarot & The Reader’s Responsibilities. Both have been updated in 2022.