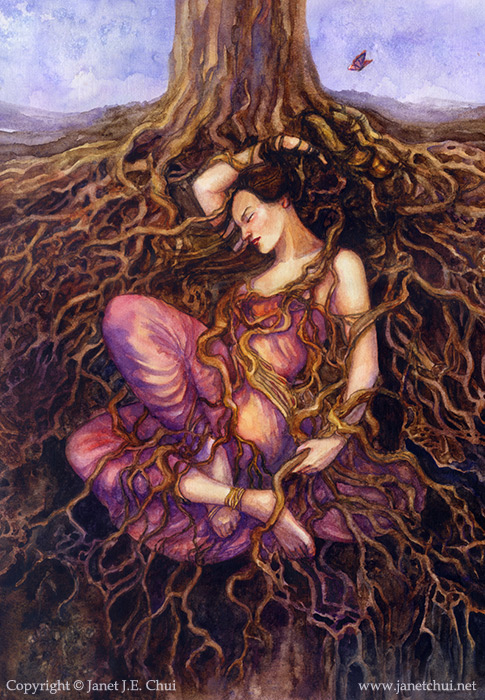 
Tangled, or the Dreaming Dryad, was partly inspired by Lord Leighton’s painting Flaming June (of which I had a print), and of feelings as a new arrival into motherhood: The less glamorised and glamorous side of which was no longer having one’s life under one’s control.

I know this isn’t the case for all mothers, but it was the extreme case for me, not least because Pluto was transiting my natal moon; my daughter required special care in her first year and my life felt like I was just walking half-dead with exhaustion to keep her alive. I had no time to myself, and what time I had, I was unable to sleep or do anything I wanted (due to exhaustion), or to recoup my energy (due to undiagnosed hyperthyroidism, one symptom of which is insomnia). TCM and holistic doctors told me later that that period had left a deep impact and taken years off my life. (I felt and knew it before they even told me, but it was a weird relief to have them confirm it, because I was unheard and unheeded at the time.)

This image became the “Break Free” card in the Self-Love Oracle.

Sometimes self-preservation comes above appearing nice or reasonable, especially if we are surrounded by people depending on our discomfort for them to stay in their comfort zone.

In terms of colours, this is one of the first paintings in which I managed darker, richer colours and texture. For the first time, I felt I could get close to the Pre-Raphaelite paintings I’d admired since my teens. I’m still very proud of this one.