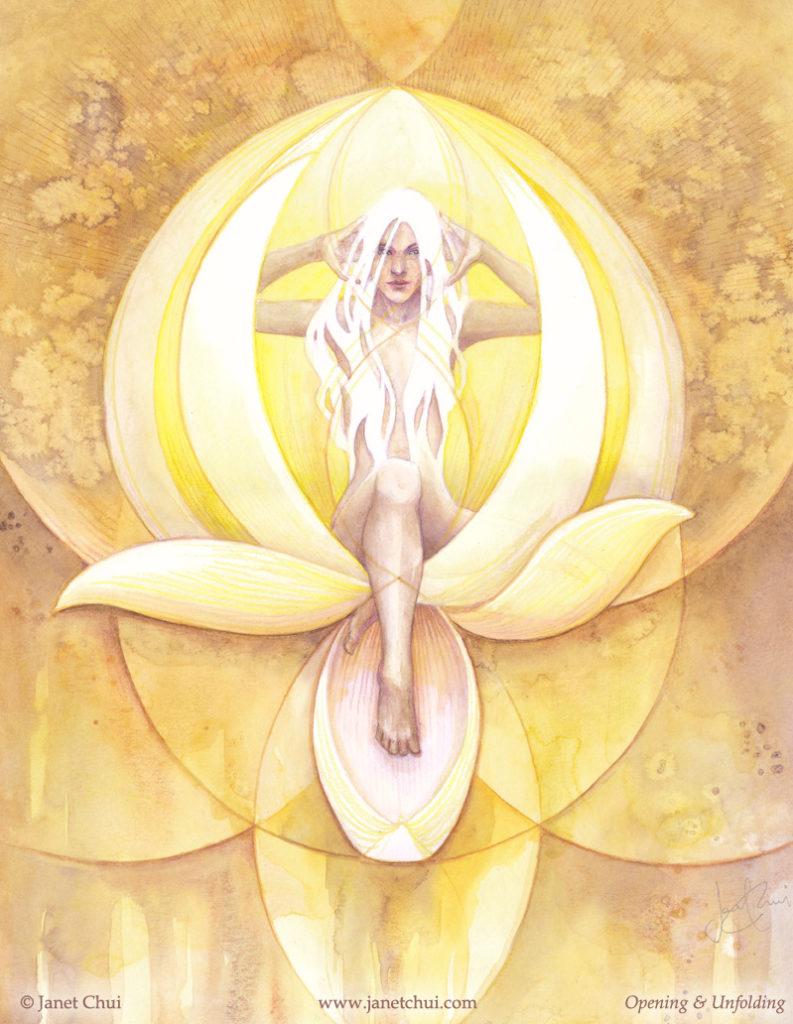 July to September 2018 brought a series of eclipses, something with which I’d been fascinated since childhood. Solar Centre is another painting related to the sun, particular its path as traced by a noon-time shadow over the year and its relationship to the solar plexus chakra. While “Solar Centre” is the card for embracing one’s shadow (the parts of us that we do not like admitting to; it’s also the following card in the Self-Love Oracle deck), Opening and Unfolding goes a step further on the sun and our shadow: healing our shadow parts and recognising them as parts of us with hidden strengths and gifts.

Some of us are more forthcoming than others in our liking of “bad-ass” or outright “bad” characters. Think Loki or Lilith. (Or Loki and Hela in Thor: Ragnarok.) Rejecting norms and prescribed power hierarchies, they are characters unafraid of pursuing their own agendas. Sometimes this rebellion has its uses (especially when rigid systems need to be toppled), other times, their behavior can go too far. But the rebel is a useful archetype that gives voice and power to uncomfortable truths and needed evolution.

Opening & Unfolding includes more than one vesica pisces shape in its composition. (The “bladder of the fish” is the 2-dimensional almond shape formed when you have two circles, each touching the centre of the other.) The vesica pisces is also known as the infinite form generator, because it is possible to draw all the shapes that have equal sides (square, pentagon, hexagon, etc) from these 2 circles and a straight rule and drawing compass. But instead of the outward expansion presented by the form generating exercise, I chose to depict a lotus bud or onion being peeled to reveal both hidden shadow and treasure.