or “The Apotheosis of Psyche” 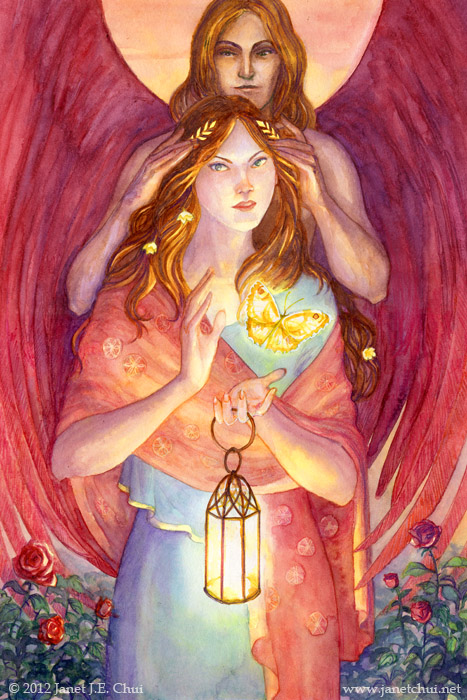 My painting of my favourite story from Greek mythology, and the art for “Share Light” in the Self-Love Oracle. Psyche and Eros (better known as Cupid, and the son of goddess Aphrodite/Venus) are the couple in this painting. Psyche was born human but of exceptional beauty, prompting Eros to fall in love with her, and put her up in a palace far away from the world, with a retinue of invisible servants. Afraid of his mother’s wrath and jealousy at his mortal beloved, Eros neither revealed himself to Psyche, nor his marriage to her to anyone else. Psyche never saw her husband, was only embraced by him at night in complete darkness, and in the palace, she had every need and luxury that royalty could hope for. But Psyche’s jealous family led her to light a lamp to look upon her secret husband, sure as they were that she had probably married a monster.

When Psyche raised the oil lamp over her sleeping husband, she was instead surprised to find his gorgeous form and feathered wings. But oil from the lamp spilled and hurt him, and Eros fled to his mother’s to recover. Psyche was prevented by her mother-in-law from any reunion with him, and sent on impossible tasks, which she completed. But in her moment of absolute despair over whether she could go on, Eros found her again, brought her before the other gods of the Greek pantheon, who awarded her with immortality and butterfly wings for overcoming her trials.

It is a story about overcoming hardship, but more, it is about that journey from innocence, through experience to integration to divinity. It can be read as a story about having divine favour from the beginning, and regaining it onnly after our ignorance, innocence and curiosity puts us through challenges that bring that divinity to our conscious awareness. In the process, we are transformed, as Psyche was.

One thought on “Divine Beloved”